DeWitt Clinton (1769-1828) was the consummate New York politician. In his lifetime, he served in the state legislature, as mayor of New York City, and even briefly as a United States senator. His biggest role in the history of New York State was as governor, and as orchestrator of the Erie Canal. 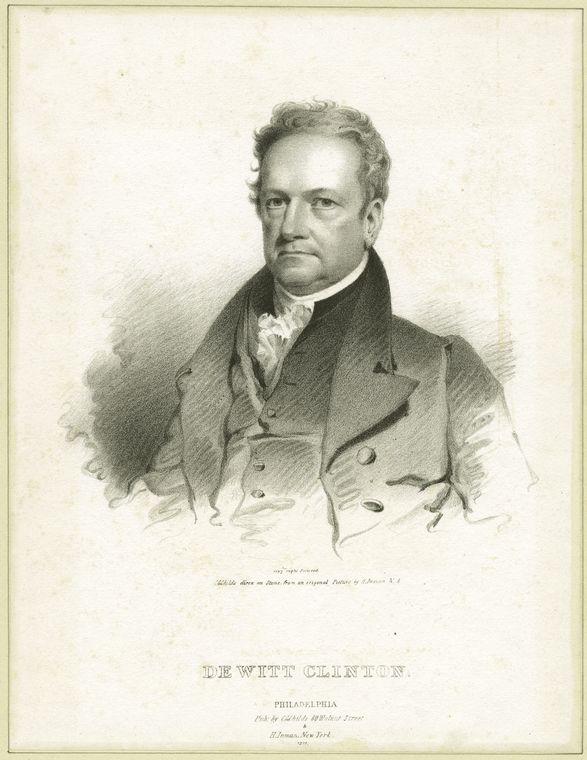 The idea of a Canal to unite the East coast with the interior of the country was not a new one. Before the Revolutionary War, General George Washington expressed concerns about the loss of lands west of the Appalachian Mountains to the French or Canadians, or both, due to a lack of connection. After the war, Washington organized the Patowmack Company to turn the Potomac River into a canal running from the coast up to the mountains. This project was a financial disaster, and was still under construction by Washington’s death in 1799. It was an achievement in engineering, however.

At around the same time, talk had begun about a canal project through New York State, where the geography was more favorable than that of Virginia. But it took a few decades to get the project together. There were questions about the engineering problems of such a project, not to mention the question of funding something that wasn’t guaranteed to pay its own way. And there were questions about the route to be taken; while it would have been easier to make a shorter route to Lake Ontario, this plan wouldn’t gain as much access to the Midwest, and as relations with the British declined leading up to the War of 1812, this idea was abandoned, as they controlled Canada.

In 1809, Thomas Jefferson had called the prospect of building a canal through the state of NY “little short of madness.” He thought it was a good idea, but failed to see how it would be possible. This was the prevailing national opinion, and so the prospects for federal funding were unlikely.

Why an Erie Canal specifically? Overland travel across the state of NY to the interior of the country was extremely difficult, and bordering on impossible during some times of the year. While the population of the young United States had rapidly increased (going from 3.9 million in 1790 to 6.3 million in 1805), the means of transportation were obsolete and a detriment to continued growth. Roads consisted of old Indian trails which had been widened and packed down with dirt. They could be extremely dusty in the summer heat and terribly swampy in cold and wet weather, especially spring thaw. Winters in New York were no less brutal at the start of our nation’s history than they are now! In very marshy areas, the roads had logs set across them with dirt in between, which was an attempt at smoothing the route; these were called “corduroy roads.” Waterways across the state often lacked bridges to connect the roads from one side to the other, making cargo passage difficult! In 1800, it took around two and a half weeks to travel overland from New York City to Cleveland. New York’s geography is favorable to a canal across the state. The Mohawk Valley forms a natural pathway through the Catskill and Adirondack Mountains, so it made sense that a canal should be constructed through the state this way.

In the 18th and 19th centuries, Europe was also having a “canal mania,” and successful canals were built in France, Germany, and Britain. The War of 1812 also showed the lack of decent transportation means to connect Lake Erie to the rest of the state, and the movement of equipment, men, and horses was dreadfully slow and expensive. And the war showed the importance of developing markets for American goods at home in America.

So what concrete advantages would a canal give? Although canal technology seems very primitive to us, in this age of self-driving cars and supersonic jet travel, in the 19th century, canals were an incredible technological innovation. Canals were flat and calm, unlike rivers, and it was easy for a boat to carry large amounts of cargo over water as opposed to over land (especially considering the condition of roads at the time!). Canal boats were not yet motorized, and there was control over speed and steering by way of the captain on board, and the driver leading the animals (mules or horses) pulling the boat by way of the towpath. The cost of shipping cargo on a canal as opposed to overland was also vastly less, and it would become incredibly profitable to move more and more items to market. Not to mention the advantage of moving people by way of the canal!

An early proponent was one Jesse Hawley, a flour merchant tasked with moving flour from western NY (where Rochester would later become famous as the Flour City) to New York City. He discussed the idea of a Canal to Lake Erie with later surveyor of the project, James Geddes. Hawley’s own fortunes would have been vastly improved by the creation of such a canal. The summer high toll charges on his overland trips across the state cut into Hawley’s profits and drove him into debt. He ended up fleeing NY for Pittsburgh to elude his creditors, but returned in 1807, and spent 20 months in Canandaigua, in debtors’ prison. He ended up writing 14 essays on the subject of the Canal, under the pen name Hercules; these were published in the Genesee Messenger, a Canandaigua newspaper. The essays are detailed and well thought out, with cost estimates and comparisons to European canals. Hawley put into words the concrete notion of a canal across New York State, and in turn inspired the Canal fever that soon swept up fervor among New York politicians, including DeWitt Clinton. 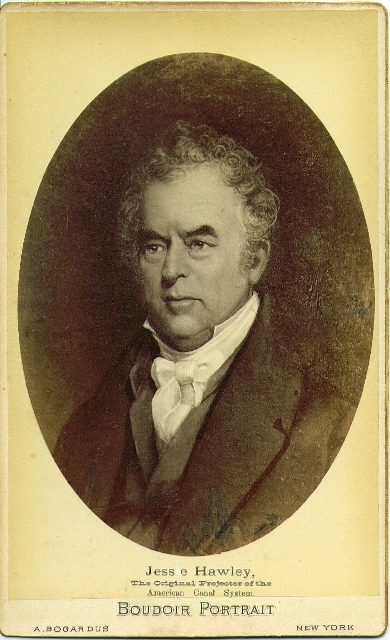 At the time, NY was exploding in population even before the Canal; by 1810, there were 959,000 people in New York State, a jump from 589,000 in 1800! And NYC had reached 125,000, and had become the largest city in the country. The Canal project may not have been popular on a national scale, but it seemed possible that the state of NY could fund it. DeWitt Clinton came to be the political spearhead of the Erie Canal project, and it came to be known derisively as “Clinton’s big ditch” because of his involvement. Clinton entered the Canal story in 1810, when he was asked to join the Commission to Explore a Route for a Canal to Lake Erie and Report, which eventually became the Erie Canal Commission (Clinton would serve on this commission until 1824); at the time, he was NY’s most powerful politician.

Clinton had the intellectual authority to turn the idea of a canal into reality. And he was capable of garnering such popular support for the project that his political enemies would be unable to oppose the project itself. Instead, they moved to attack the man himself, and somehow also made themselves out to look as if they were also in favor of the project. In 1816, Clinton won preliminary legislative support for the Canal, and the state legislature demanded complete plans for the project, including route, means of construction, and how it was to be financed. Clinton presided over the commission during this planning process. 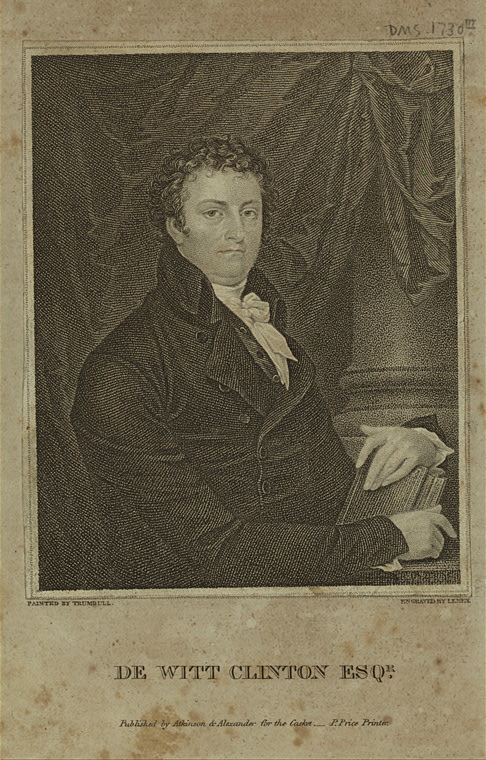 The work was to be divided into three sections: Western (165 miles from Lake Erie to the Seneca River), Middle (72 miles from Seneca River to Rome), and Eastern (126 miles from Rome to Albany). Engineering the project was a concern; at the time, there were no professional engineers in this country, and the Canal was created by talented amateurs such as James Geddes (western division) and Benjamin Wright (middle division). Charles Broadhead was assigned to the eastern division. Canvass White, another amateur engineer, joined them in this process, and traveled to Great Britain to cover 2,000 miles of English canals on foot, learning and studying to bring knowledge back to New York.

In early 1817, after several years of campaigning, planning, and strategizing by DeWitt Clinton and the Canal Commission, not to mention the large stumbling block of the War of 1812, the State Legislature passed a Canal Act. Construction officially began July 4, 1817, just three days after Clinton took office as New York’s governor on July 1. DeWitt Clinton was elected New York Governor earlier in 1817, after sitting Governor Daniel D. Tompkins left the office to become Vice President. Clinton was in office for a first 3 year term, then ran again and was reelected in 1820, serving until 1822. Clinton’s political fortunes faltered during this time, as the New York State Constitutional Convention of 1821 shortened the gubernatorial term to only 2 years, and moved the term beginning to January 1, cutting off the last 6 months of Clinton’s 2nd term. He was not renominated for the 1822 election. During this time, Clinton served as President of the Erie Canal Commission, overseeing the ongoing Canal project. Clinton’s political enemies, the Bucktails agitated for and voted in the state legislature for his removal from the commission. This was a bad move on their part, as Clinton was nominated and reelected for Governor in 1824 by “the People’s Party,” in opposition to the official Democratic-Republican candidate, Samuel Young (who was also on the Canal Commission). He was reelected in 1826, serving as NY Governor until his death in 1828. This perhaps illustrates better than anything else how Clinton’s political fortunes were linked to his role as the spearhead of the Erie Canal.

Clinton’s triumphant return as New York’s governor  near the end of Canal construction meant that he lead the official opening ceremony, known as the Wedding of the Waters. This began October 26, 1825. It was the first complete voyage on the newly completed Canal and took 9 days. Clinton was on the lead boat. On the morning of November 4, the boats arrived in Albany. The boats then headed south on the Hudson towards New York City. When they arrived, Clinton poured a keg of Lake Erie water into the Atlantic, thereby completing the “wedding of the waters.”  He made the following speech:

This solemnity, at this place, on the first arrival of vessels from Lake Erie, is intended to indicate and commemorate the navigable communication, which has been accomplished between our Mediterranean Seas and the Atlantic Ocean, in about eight years, to the extent of more than four hundred and twenty-five miles, by the wisdom, public spirit, and energy of the State of New York; and may the God of Heavens and Earth smile most propitiously on the work, and render it subservient to the best interests of the human race. 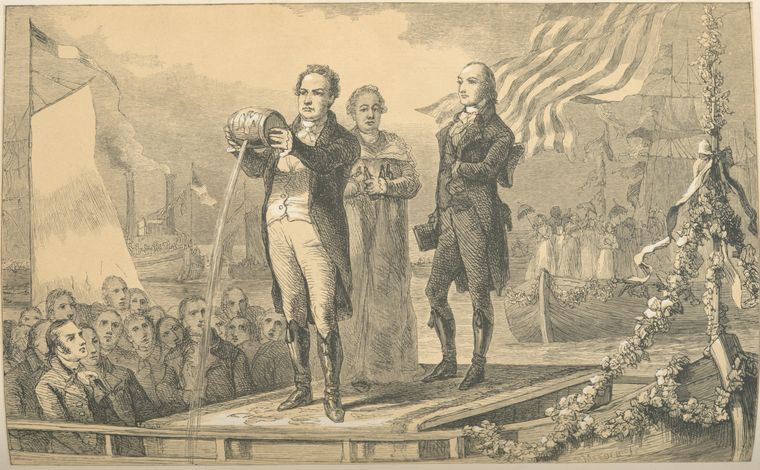 The Erie Canal was an incredible accomplishment, for both the state of New York as well as the United States. And were it not for the influence and determination of DeWitt Clinton to take it from idea to reality, it might never have existed.